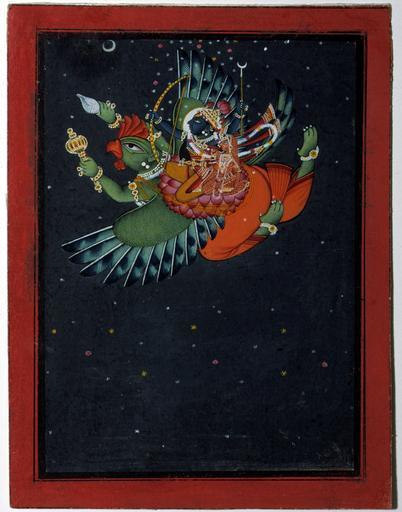 Garuda, the king of birds, is a legendary bird-like creature mentioned in many cultures around the world. He is seen in Hindu, Buddhist and Jain mythologies. In the Mahabharata, Garuda is described as a shapeshifting, giant eagle-like bird; with wide-spanning, powerful wings; with an ability to travel to any place at the speed of thought. Garuda is also described as loyal, intelligent, brave and righteous.

Garuda is one of the most fascinating characters in the Mahabharata, with powers equal to the King of gods, Indra. He is the vehicle mount of Lord Vishnu and the enemy of the Nagas.

In his bird form, Garuda is depicted as a giant, tremendously powerful bird with a brilliance similar to that of the sun. When Garuda shapeshifts to his part human form, he is depicted as having eagle-like features with a large beak and wings, with a human torso and limbs.

Read more about the king of birds in Garuda Part 2. There once lived a Prajapathi by the name Daksha, a Manasaputra of Brahma. Prajapathi Daksha was a powerful King. He had sixty daughters with his wife, Prasuti; they were all married to different deities: his youngest child, Sati, was married to Shiva; 27 daughters were married to Chandra (Moon); 13 were married to Kashyapa; 10 to Dharma and so on.

Sage Kashayapa, who was married to 13 of Daksha’s daughters, wished to have sons and arranged for a sacrifice to be held accordingly.

Sage Kashyapa, one of the Saptarishi—the illustrious seven sages of the ancient times—decided to undertake a sacrifice in order to have a son. Many powerful people—gods, rishis and gandharvas—attended the sacrifice; they even helped him to prepare for the auspicious event. The god of gods, Indra himself was present for the occasion.

In the midst of the preparations, Kashyapa asked Indra to help bring some firewood for the sacrifice. A few other gods and sages accompanied Indra in his task. Indra chose a huge piece of wood, which he hefted easily over his strong shoulders and carried back to the sacrifice venue like it weighed nothing.

During the preparations for the sacrifice, Indra offends a group of powerful sages, who decide to punish Indra for his arrogance by replacing him with someone more powerful.

Among the sages who had accompanied Indra to collect firewood were Valakhilya sages, who were ascetics known for their rigorous forms of self-denial. Valakhilya sages were extremely small in size—as big as the joints of the thumb. A group of Valakhilya sages together carried a single palasha* leaf. On their way back to the sacrifice venue, the tiny sages got stuck in a muddy, water-filled hoof print of a cow. When the mighty Indra saw this scene in front of him, he laughed at the Valakhilya sages and stepped over them to pass them and continued on his path. The Valakhilya sages, angry and insulted by Indra’s disrespectful behavior, decided to undertake their own sacrifice, where they said that there will be another god of gods, who will have powers similar to that of the present king of gods (i.e., Indra). The sages said that this king will will inspire fear in Indra himself.

Kashyapa saves the day! Valakhilya sages, pleased with Kashyapa’s wisdom, bless him with a promise of sons with extraordinary powers.

Indra was beside himself with worry when he learned about this sacrifice. He consulted with Kashyapa, who in turn spoke to the Valakhilya sages. When the sages confirmed that they did in fact say that there will be another Indra, Kashyapa convinced them it wasn’t a good idea. He reasoned with them that since Brahma made the present Indra, creating a new Indra would be akin to going against Brahma’s words. Kashyapa didn’t want to risk causing offense to the sages by making them retract their words, so he suggested to the sages to make their prophesized other Indra be born as a bird.

Pleased with the way Kashyapa handled the difficult situation, the Valakhilya sages tell him that the powerful child that they prophesized would be born to Kashyapa himself. They tell Kashyapa to handle the gift as he saw best since they trusted him to manage it wisely.

Kashyapa was delighted with the gift bestowed upon him by the Valakhilya sages. He received this gift around the time when his wife, Vinata (Daksha’s daughter) expressed a wish to have sons. Kashyapa told Vinata that she would have her boon and would be blessed with two sons, who will be born as birds blessed with great powers and abilities.

It was not only Vinata to whom Kashyapa had granted a boon, he had also granted one to his wife, Kadru, who was Vinata’s sister. Kadru and Vinata were competitive and often tried to outdo each other. Kadru asked Kashyapa for 1000 Naga sons (semi-divine serpents), who were all equally powerful; Vinata in turn asked for two sons and wished for them to be stronger and more powerful than Kadru’s sons.

Kashyapa gave them both embryos for the children they wanted. Kadru got 1000 embryos which carried her Naga sons. Kashyapa gave Vinata two embryos and told her that she would have bird-sons, one of whom would be the Indra of the birds with powers similar to that of Indra’s.

Both Kadru and Vinata were ecstatic about the impending birth of their children. They incubated the eggs by placing them separately in steaming vessels. After waiting for 500 years, Kadru’s eggs hatched and the Naga children were finally born. An anxious and impatient Vinata, was still waiting for her sons’ birth. She began to worry about her eggs and wondered why Kadru’s children were born, but her’s were not. Foolishly, she cracked open one of her eggs to look inside. To her horror, she realized that she had forced open the egg prematurely, and only the upper-half of the baby bird was completely formed.

Vinata’s half-formed son was enraged by his mother’s unwise decision. He scolded her for acting unwisely because of jealousy and impatience. He revealed to her that as a punishment for what she had done to him, she would be enslaved for a period of 500 years by the very person she was looking to compete with. He also warned her that she had better take good care of her remaining egg and wait patiently for 500 more years for the birth of her son, because only he can free her from her slavery. With these words, he flew into the sky, where he lived as the sun’s charioteer. He is called Aruna and can be seen as the red sky every dawn.

The birth of a legend.

500 more years passed. A repentant Vinata forced herself to be patient and left her remaining egg to incubate undisturbed. When Garuda was ready, he broke open the egg on his own and came out into the world. Just as promised by the Valakhilya sages, he was an extraordinarily powerful bird. He was a fierce looking bird; strong and unbelievably large; and Vinata finally got the son she waited for so long.

For more about Garuda’s relationship with his Naga half-brothers; how Garuda stole the amritha; and Garuda’s many adventures, read Part 2 of Garuda.