Govina Haadu – The song of the Cow. 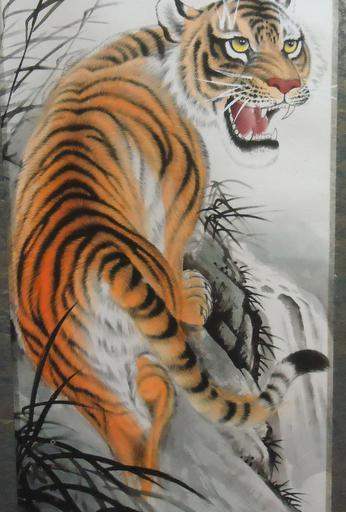 Govina Haadu,also called, Punyakotiya Kathe, is a story about a cow named Punyakoti, who inadvertently crosses path with a very hungry and fierce tiger named Arbhuta. Based on a story in Mahabharata, this beautiful, soul stirring song has been part of Kannada folklore for thousands of years.

The following is not a translation; it is my humble effort at retelling this beautiful story.

(Caution: Story contains themes of suicide and death. Please do not continue reading if you find such themes distressing.)

There was a land called Karnata (present day Karnataka, India), consisting of fifty-six regions, and here lived a cowherd named Kalinga. Kalinga, along with his much-loved herd of cows, lived near the forest. Each morning, he woke up early, and after a bath in the nearby river, he dressed himself in clean clothes. He sat under the shade of the mango tree nearby, passing the day pleasantly, playing melodious tunes on his flute.

A herd of cows in the forest.

When it was time, Kalinga got ready to milk his cows. He had great affection for them and called on them lovingly, calling them each by their name: “Come over, Ganga; come over Gouri; and you too Thungabhadra and Kamadhenu, Punyakoti and Punyavaahini.”

Hearing Kalinga’s voice filled with love and adoration; the animals rushed to him to do his bidding. Kalinga milked the cows, and as always, his pots quickly filled to the brim. Afterwards, Kalinga herded the cows towards the forest. Slowly, the cows made their way into the forest, which was surrounded by mountains and lush vegetation. They found the perfect patch of grass to graze in the valley.

A hungry tiger on the prowl.

Not too far from where the cows were now grazing, and unbeknownst to both the cows and Kalinga, a ferocious tiger named Arbhuta lived in a cave in the foot of the mountains. It had been seven long days since Arbhuta’s last meal. Faced with unbearable hunger, Arbhuta prowled the mountains around his cave desperate for his next meal.

The predator Arbhuta sensed the presence of the herd of cows nearby. He quickly made his way to where the cows were grazing peacefully. With a ferocious roar, Arbhuta lunged towards the cows, startling them into action. They scattered away, quickly putting as much distance between themselves and the starving tiger as they could.

All but one cow remained. Oblivious to the frantic escape of the other cows in the herd, a cow named Punyakoti was walking slowly, her mind on her young calf waiting for her back in the barn.

Relief coursed through Arbhuta when he saw the defenseless cow—he was finally going to break his fast. Arbhuta walked to stand in front of Punyakoti, securing his hunt.

“I’ll slit your skin with my claws and slice your body open,” Arbhuta threatened Punyakoti with a roar.

“Can you grant me one last wish?” a terrified Punyakoti pleaded with Arbhuta. “My young calf is waiting for me in the barn. Would you let me return to my young calf for a few minutes? I would like to feed him one last time, and then I shall return right back to you.”

“Do you take me for a fool?” Arbhuta scoffed. “Why would I let go of a meal I caught whilst I am suffering from hunger? And why would I believe you would return to me once I let you escape?”

“Let the Trimurthis* be my witness, I promise you I will be back. I swear on the Sun and the moon, I shall return back to you. I swear on mother earth, I shall return.”  Punyakoti pleaded and convinced Arbhuta. With an assurance that she would not break her promises, she left to see her child one last time.

As soon as Arbhuta agreed to let her go, Punyakoti rushed back to the barn. She searched for her beautiful son in the barn and when she found him, she immediately fed him her milk.

When her son was done drinking, she warned him about the dangerous Tiger prowling the mountains. She instructed him to be cautious, and told him to avoid wandering or grazing around that area. With a heavy heart, she explained to him what had happened and what she must do now.

“Don’t go, Amma,” her calf told her. “You don’t have to go. No one will blame you. Others in your position would decide not to go back,” the calf reasoned.

Punyakoti told her son she would not break a promise she made in good faith; it wasn’t right and she would not stand for it. “Truth, to me, is our mother and father; truth is our relative and friend; would the Lord (Vishnu) like it if I disregard such a relationship?”

“But…if you are gone, whose milk shall I drink, Amma?” the distressed calf asked. “Who will I live with? Who will I sleep next to? And who will raise me?”

Punyakoti looked around her slowly and called out to all the other cows—her friends, all of whom she had grown up with. “My son will be an orphan soon. Please look after him like he is your son,” she tells them. “Please be patient with him; treat him like your own. Take care not to bump into him or kick him whilst he is walking next to you.”

With that, Punyakoti said her final goodbye to her beloved son. “I am sorry I have to go,” she told him as she enveloped him in a tight hug. “You will be orphaned, I know. But, as a prey, I have to pay both our debts to the tiger,” she explained one last time, willing her young son to understand. She released her son and left to go back to the cave, where death awaited her.

On her way to the cave, she stopped over at the holy lake to take her last bath, from there she walked to the cave to face the tiger yet again. Arbhuta was taken aback with surprise when he heard Punyakoti calling out for him and he found her standing by the entrance of his cave.

“I am back. My flesh and blood are now all yours to feed on. Feed on me well and live contentedly,” Punyakoti tells Arbhuta.

Punyakoti’s words and actions moved Arbhuta to tears. He was shaken by her bravery and honesty. He struggled with feelings of guilt and doubt over killing Punyakoti as he felt a kinship with the truthful cow. “How can I hunt someone I have so much admiration for? It feels to me like she is my kin; it wouldn’t be right, the Lord (Vishnu) will never forgive me if I harm her,” Arbhuta thought to himself.

“I can’t kill you,” Arbhuta declared. “You are my kin and it is impossible for me to kill you. I have nothing to gain by eating you. I would rather give up my own life at your feet than harm you.”

“Why would you not eat me? Why do you want to die instead? You are hungry and I am your prey. Eat me and satisfy your hunger. That is the way of things.”

Yet again, Punyakoti’s wise and selfless words moved Arbhuta to tears. He looked around him in contemplation. He was distressed—even though he was suffering from acute hunger, the prospect of killing Punyakoti felt like a crime to him; in that moment, he felt terrible about the position he was in.

He walked to the edge of the mountain, prayed to the Lord one last time and leapt up into the sky and down the mountains to end his life.

This is the story of Punyakoti, who believed in Truth as her God.