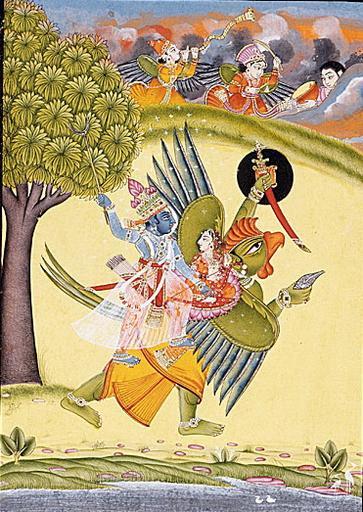 Garuda was born as a strong and powerful bird. Even as a little infant, he was independent and didn’t need an adult to take care of him. As soon as he came out of the shell of his egg, he flew out into the world on his own, in search of food, leaving his mother behind.

You can read more about his origin story in Garuda Part 1.

A wager made; a cheat inspired; a sister enslaved.

Around this time, when Garuda was away from his mother, Kandru and Vinata got into a wager with each other regarding a horse. One day, they happened to catch a quick glimpse of the splendid horse, Ucchaishrava (Indra’s horse).

“What color do you think the horse is?” Kadru asked Vinata.

Vinata said it was white. “What color do you think it is?” she asked Kadru, before suggesting a wager.

Kadru suggested, and they agreed, that the one who was wrong about the color would be a slave to the other.

“I say the horse has a black tail,” said Kadru.

They decided see the horse for themselves. Before leaving to see the horse, Kadru went to her sons and told them to turn into strands of black colored hair and wrap themselves around the horse’s tail. To Kadru’s surprise, her children refuse. Kadru couldn’t accept the fact that her children would risk the chance that she would be her sister’s slave if she lost the wager. Deeply offended by her children’s disobedience, she lashed out at them in anger: “Janamejaya, of the Pandava lineage, will have a snake-sacrifice. I curse that the fire from the sacrifice will consume and destroy all of you.”

The following day, Kadru and Vinata travel across the vast ocean to see the horse. To Kadru’s delight and Vinata’s distress, the horse’s tail was black in color. Vinata lost the bet, and as a result became Kadru’s slave from that day on.

A deal  between the half-brothers.

Meanwhile, with each passing day, Garuda grew both in size and strength. He was a magnificent bird. When he flew up in the sky, he appeared as resplendent as the sun, often leading others to misunderstand him for the sun. As he grew bigger and bigger, the gods started to mistakenly worry that the sun was increasing in size. They went to Agni, the sun god, and asked him to stop growing. When Agni cleared them of the misunderstanding, the gods went to Garuda and pleaded with him to stop getting so big, to which he agreed and moderated his own size.

After some time had passed, he finally returned to his mother. One day, Kadru asked Vinata to take her and her children to the faraway land of Nagas. Since Vinata was serving as Kadru’s slave, she had to agree. Vinata asked Garuda for help to transport his Naga half-brothers by flying them on his back. Garuda did as his mother asked.

The Naga brothers sat on the powerful Garuda’s back, who transported them to the island in no time at all. Kadru and her sons had a great time on the island. However, they became greedy for more. They now knew how easily Garuda could transport them around, so they demanded that Garuda take them to other beautiful places all around the world.

Unimpressed with their demands and attitude, Garuda questioned his mother. “Why do we need to cater to their whims and fancies?” he asked Vinata.

Garuda was incensed by the way his mother was being treated, but he realized that the only way out for his mother is to be free of the debt of the wager with Kadru. With that in mind, Garuda goes to his Naga half-brothers and asks them what it will take for them to free his mother from slavery. The Nagas say that they will grant Vinata her freedom if Garuda brings them the drink of the devas, the amritha (a divine nectar for power and immortality).

A hungry Garuda is a dangerous Garuda.

After obtaining the amritha from the ocean, Indra and the other gods secured it by keeping it in their world under heavy guard. Garuda knew it was going to be a difficult task stealing the amritha from under the gods’ noses, but he didn’t see any way around it as he wanted to make sure that his mother was a free woman.

Garuda started to make preparations to go to Indra’s world. He told his mother he was very hungry and needed to eat. “What should I eat?” he asked her.

Vinata told him to eat the Nishadas* who lived in the mountains beyond the ocean. Garuda swiftly flew to the mountains where the Nishadas lived. He flipped his giant wings, creating a violent storm of dust up in the sky, the storm sent reverberations through the mountains and dried up the oceans. The Nishadas could not see a thing because of the dust, and in their panic, they ran right into Garuda’s big, waiting mouth.

“Tell me what to eat,” Garuda said.

Kashyapa told Garuda about a pair of ascetic siblings, Vibhavasu and Supratika, who, during a fight over their inheritance, had cursed each other to turn into a tortoise and an elephant, respectively. Kashyapa told Garuda that even in their animal form, the brothers try to kill each other all the time, and were generally being a nuisance to everyone around them because of their enmity; additionally, they were humungous in size and would help to appease Garuda’s appetite.

Garuda captured the elephant and turtle. He held them in his giant claws and flew looking for a comfortable spot to eat them. When he flew over an inviting-looking canopy of trees, he stopped and sat on a branch of a big, sturdy looking tree. However, the branch could not take the immense weight of Garuda, along with the elephant and turtle. As Garuda saw the branch break off of the tree, he noticed a group of Valakhilya sages hanging down from the same branch. Garuda was sympathetic towards the extremely small bodied sages; he quickly grabbed the branch by his beak and made sure the sages remained unhurt.

Kashyapa happened to see Garuda flying around with an elephant and turtle in each claw and the sages hanging from a branch from his beak. Kashyapa went to the sages and explained Garuda’s situation to them, he also assured them that Garuda didn’t mean to cause them any harm. After making sure the sages were safely back on the ground, Garuda satisfied his hunger by eating the elephant and the turtle.

The way to freedom is fraught with danger.

With a full belly, Garuda flew to Indra’s abode at a speed faster than thought. The gods were warned beforehand about his approach. They stood ready with their best weapons and amour. However, when they saw the fierce Garuda approach them, they were in awe at how powerful he looked. They began to doubt their ability to defeat the bird who was rumored to have powers that matched even that of Indra’s.

A fierce fight ensued when Garuda came face-to-face with Indra’s army. Garuda’s roar thundered in the sky, sending waves of panic amongst the gods. Garuda flapped his powerful wings to create strong gusts of dust, which temporarily blinded and confused the gods; he used his big, sharp talons and beak to rip apart his enemies. They fought long and hard; but Garuda showed no signs of exhaustion, nothing slowed him down. He killed Bhauvana and many other gods who fought against him.

Finally, Garuda was able to get close to the place where the gods had kept the amritha, which, unsurprisingly, had layers of protection around it. First, there was a ring of fire surrounding the amritha—it was no ordinary fire, it was a tall wall of fire, as hot and intense as the sun, and it swayed dangerously because of the wind. Garuda changed himself to have an enormous mouth—big enough to fill countless gallons of water—he swiftly flew to the rivers, filled his mouth with water, returned to the fire and drenched it in rivers of water.

Beyond the fire, Garuda saw a continuously revolving wheel, which had blades sharp enough to slice apart anything that dared to cross it. Garuda turned himself into a small bird and slipped in between the sharp blade-like spokes of the wheel.

Once inside, he saw two extremely large, fierce looking, poisonous snakes guarding the amritha. The raging snakes had poison-filled eyes. Garuda acted quickly: he once again flapped his wings, causing a storm of dust around the snakes. The snakes closed their eyes shut against the dust, giving Garuda the perfect chance to attack and kill them. He took the pot of amritha and left the gods realm with it.

Pleased with the fact that Garuda didn’t use the amritha even though he had access to it, and that he had prioritized saving his mother over a chance at gaining superior powers, Vishnu paid Garuda a visit and offered him a boon as a show of his appreciation. Garuda asked that 1) he wanted to be above Vishnu always, and 2) a gift of immortality. Vishnu granted him both his wishes. Therefore, Vishnu gave him a place atop his flagstaff, placing Garuda above him at all times. Courteously, Garuda offered a boon to Vishnu in return and Vishnu asked Garuda to be his vehicle, to which Garuda agreed.

On his way back home, Garuda was attacked by Indra. Indra hit Garuda with his fearsome weapon Vajra (the thunderbolt), but it failed to cause any harm to Garuda. They started to talk and because of mutual admiration, they striked up a friendship of sorts. Indra asked him to return the amritha, he told him about the damage it would cause if the wrong kind of people got their hands on it; in this case, the Nagas. Garuda told him that he didn’t want the amritha for personal use; but he needed it to barter for his mother’s freedom; he explained to Indra about his deal with the Nagas. He also told Indra that after he had fulfilled his part of the deal and gave the Nagas the amritha, Indra can have it right back. Together with Indra, he concocted a plan to fool the Nagas.

Garuda went back to the Nagas and gave them the pot of amritha. Garuda reminded the Nagas of the deal between them and made sure they freed his mother. When the Nagas were about to drink the precious nectar, Garuda suggested that they should wash themselves first. Agreeing to the suggestion, the Nagas rushed to the nearby river to wash up, during which time Indra came to steal the pot of amritha back from them.

When the Nagas came back from their bath, they saw that the pot was gone. They realized that they had been tricked. In an act of desperation, they licked the grass on which they had previously placed the pot of amritha. The darbha grass burned their tongues, splitting it into two; which is why, even to this day, the snakes have forked tongues.

And this is the story of why even to this day Garuda and snakes are considered enemies.