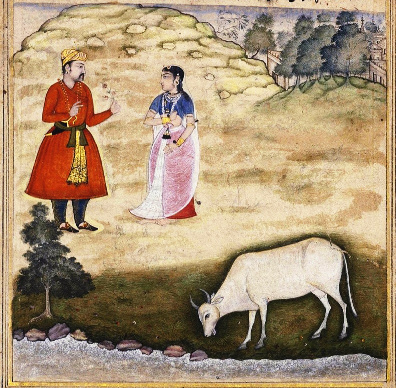 Vasus are deities representing the eight elements—earth, water, fire, wind, sun, sky, moon and the stars. Each elemental god has a name and it varies depending on which Indian literature you are referring to. In the Mahabharata, they are named Dhara, Aha, Anala, Anila, Pratyusha, Prabhasa, Soma and Dhruva, respectively. They are said to be the children of Manu, who is the son of Brahma, and are collectively called the ashta vasu or eight vasus. The Vasus, very unwisely, decide to steal sage Vasishta’s cow and get in trouble. Vasishta curses them with life of a mortal on earth. The Vasus beg Ganga to help them manage the curse.